I had the privilege of meeting ESPN college basketball analyst Jay Bilas Tuesday night when he visited Durham and discussed his new book about toughness - what it is, how it's displayed and how the top college basketball coaches in the country develop tough players and teams. 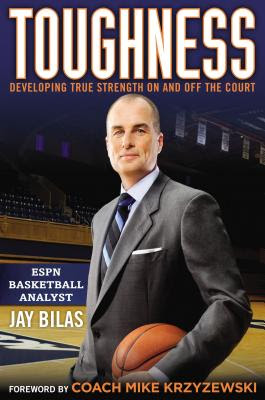 Bilas knows basketball. He played for Duke's Mike Krzyzewski and helped the team reach its first Final Four in 1983 and national championship game in 1986. He was drafted by the Dallas Mavericks and played professionally in Italy and Spain, then later returned to Duke as an assistant coach. The Blue Devils won two national championships in 1991 and 92. An Emmy award-winning analyst, he's covered college basketball for ESPN since 1995.
But he also understands that toughness exists in every industry. His own experiences as a trial lawyer and actor (he co-starred with Dolph Lundgren in Dark Angel in 1990) add valuable depth to his definition.
Bilas shared 34 examples of toughness as it applies to basketball in an espn.com article in 2009 (subscription required) before expanding it into a book. Some of his "tough traits" include playing so hard your coach has to take them out, taking and giving criticism the right way and showing strength in your body language.
What's the definition of "toughness" as it applies to the iron game? What makes a lifter tough? Post a comment and let me know what you think!